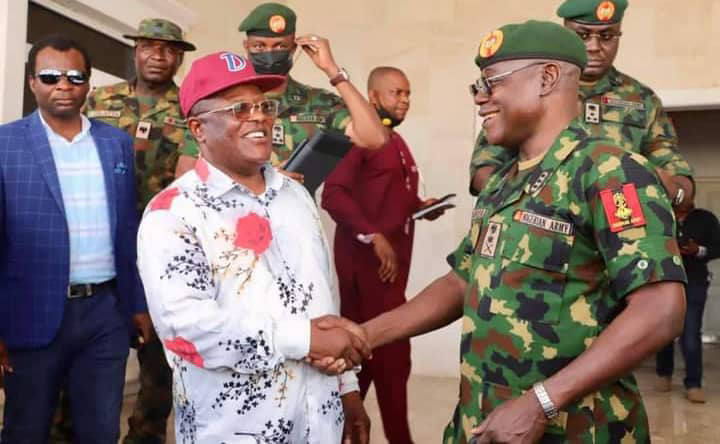 Yahaya while speaking  with newsmen, at the military cantonment, Nkwagu barracks, said  that the “Golden Dawn”exercise flagged off in the South-East; while operation “Still Water” for the coastal areas and “Enduring Peace” for some states in the North Central and Federal Capital Territory.

He noted that the periodic exercise was to checkmate criminal activities that takes place during the yuletide period and would be done in collaboration with other sister agencies in the country.

Lt. Gen. Farouk further stated that he would be visiting Anambra to assess the security situation there.

According to him, “I came again to 82 Division Enugu this time around to flag off our exercises ‘still water’, exercise ‘enduring peace’ and ‘golden dawn’, these are exercises and operation we conduct almost every yuletide season in other to checkmate the criminal activities that are associated with this period of the year.

“As I flagged off the operation in Enugu today, it is being simultaneously flagged off  in South South, Southwest, in North Central also.

“The aim like I said is to checkmate and it is not only in army, we are doing it in synergy with other services and other security agencies. In Enugu for example you have seen the police, you have seen the DSS, even Road safety, the for service , Customs, NDLEA all and including also other stakeholders and well meaning Nigerians who we are always telling upon and also bring reliable information because security is everybody’s business and that is why we are here.

” I will be going to Anambra to know what is happening there and see the troops and assess the situation there”.

The Army General during his visit to commissioned the 24 support regiment headquarters commanded by Lt Colonel AM Saad after which he paid a courtesy visit to Governor David Umahi of Ebonyi state.