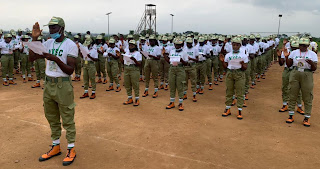 Pastor Donatus Obijiofor who spoke on behalf of the entire church said that the church sued NYSC to court because it is a breach of fundamental human rights under section 38(1) of the constitution of the Federal Republic of Nigeria adding that the fundamental rights of the people as regards religion must be respected & it’s the right of the female corpers to practice their religion freely in the country which should be tolerated by all & sundry & any system that does not respect religion is satanic.

According to him, the church decided to sue NYSC to Abakaliki High Court in Ebonyi State for continues victimization, harassment & expolsion of Christian Female Corps Members from orientation camp for holding on to their religious faith to seek redress on the matter but unfortunately he lost the case in the lower court allegedly said that the Abakaliki High Court barricaded & twattered the case & described the judgement as jungle justice & unacceptable by him.

Pastor Donatus Obijiofor said that the leadership of the church, Holiness Revival Movement Worldwide, have already briefed their lawyers to go for Appeal in the Higher Competent Court to quash the unfair judgement passed by the lower court in Abakaliki High Court & expressed optimism that the Appeal will give the church justice & victory for God & the Christian all over the world.

He stated that in the book of Deuteronomy chapter twenty-two verse five which says that ” A woman must not put on a man’s dress, neither should a man put on a woman’s dress”. Therefore, trousers & shorts are strictly for men. Any form of trouser by whatever name it is called is forbidden for women.

Pastor Obijiofor further cited another Bible quotations from the book of first Timothy chapter four verse twelve, that the believer must be an example to other christians in his or her clothing while Galatians chapter five verse twenty-six also says, ” And he or she must not dress to show off” and the book of first Corinthians chapter ten verse thirty-one says, ” And projecting the Glory of God must be the sole aim in bodily clothing”.

Pastor Obijiofor maintained that christians or believers have the liberty to use as many designs or style of clothing as they desire as long as they do not transgress scriptural principles.

He therefore, revealed that year after year for over a decade now, christian female corpers are harrassed, victimized & expelled from orientation camp by NYSC authority for refusing to wear white shorts & the khaki trousers because of their religious beliefs & they see the action of wearing trousers as evoking immorality adding that in the 1970’s & 1980’s mothers were wearing skirts & preferred to go back to that.

The man of God, the church vowed not to relent until God gives them victory in their Appeal at the Higher Competent Court to demand the inclusion of skirts as part of the uniforms for the NYSC Scheme where he believes to get justice on the matter.

He said that the church insisted that it was time skirts were approved for the scheme by the authority & demanded that all those christian female corpers sacked because of their religious beliefs should be recalled to complete their NYSC course in Ebonyi State.