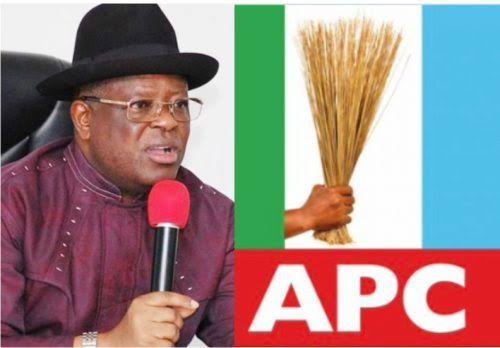 The party in a statement signed by its spokesperson in Ebonyi, Simbad Ogbuatu and made available to THE VOICE on Friday countered the post credited to to a PDP Chieftain in Abia State Dr Isaac Nkole which stated that Umahi and a former Governor of Abia State,Orji Kalu, who is the current Chief Whip of the Senate, are making desperate moves to return to PDP, describing the report as not only fake but laughable, gibberish and jaundiced.

The party called its members in the state to disregard the report as there was no iota of truth in it.

Recall that Gov Umahi had ran for governorship twice under the Peoples Democratic Party, PDP but dumped the party in November 2020 for the All Progressives Congress, APC.

The statement reads in parts “The Chairman of Southeast Governors’ Forum, the Leader of our great party, All Progressives Congress APC and Executive Governor of Ebonyi State, Engr David Nweze Umahi, has at no time and will never plan to return to People’s Democratic Party (PDP)”, the statement said.

Continuing Mr Ogbuatu said: “Gov David Umahi’s defection to the national party did not come to him as stupefaction, neither did he join for selfish enrichment”

“The defection was a well-thought movement which was decided in the greater interest of Ebonyi State in particular and the Southeast in general”, he added.

The Ebonyi APC spokesperson noted that Mr Umahi saw the need to toe the line of the former nationalists like Late Dr Nnamdi Azikiwe and others from Southeast who had always believed in the politics of the centre, consequent upon his decision to take our dear state and Southeast to the grid of national politics.

He said:”Governor Umahi as a father and leader of Southeast saw that the present and the future time of the zone is brighter and more promising in APC than the PDP in which the zone had partnered, put up with and worked for twenty years with nothing to show for it.

“Gov Umahi defected to APC in order to join hands with an Icon of Integrity, and a selfless leader President Muhammadu Buhari GCFR and other well meaning Nigerians in taking Nigeria to the next level.

“Under President Muhammadu Buhari’ s APC led government, every part of Southeast has benefitted in infrastructural development and the only way to appreciate Mr President is to join him in the next level transformation agenda, and that is the leading reason Gov Umahi defected to APC”.

Mr Ogbuatu stated that Umahi has done exceedingly greater than his contemporaries as a governor in this dispensation.

“As the leader of Southeast, Gov Umahi has also demonstrated commitment, patriotism, extraordinary capacity and knowledgeability in the manner he pilots the affairs of the zone”, he added

The APC, therefore, warned the PDP not to distract the governor who is highly committed to providing quality leadership to Ebonyi people.

” Finally, we wish to state bodaciously that Gov Umahi has not, either in person, a representative or through a surrogate made and will never make any move to return to the Social Club known as PDP.

“He is at home in APC as the Ebonyi State Leader of the party for more than one year today. Members of the public should therefore disregard the misleading news as it is the figment of the imagination of the originator who lives in nothing but mischief making and illusionary disposition“