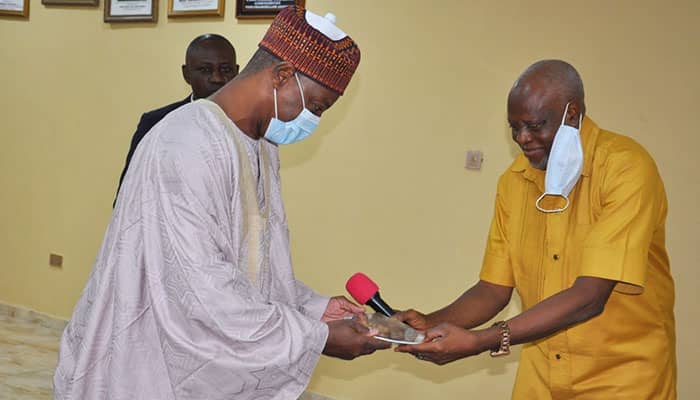 The Vice Chancellor of Alex Ekweme Federal University, Ndufu Alike Ikwo, Prof. Sunday Elom has disclosed to members of the public that the State government is yet to relocate, and compensate the indigenes of the host community, whose land were acquired for the establishment of the institution.
He made this known on Wednesday, April 29, 2021 during the town hall meeting organized by Presidential visitation Panel at the institutions permanent site. Prof. Elom revealed that since the inception of the school in 2011, the government who surveyed the land and handed over to necessary authorities has neither compensated nor relocated land owners, this according to him, has made indegenes dwell in the university, thus posed as a threat to the development of the institution.
“Inspite of this, the university has consistently provided employment and various opportunities to many of them and also relocating and resettling them. Once again, we appeal to the Ebonyi state government to intervene in the compensation and relocation of the indigenes of the host community who are still residing and dwelling on the university land, to forestall the breakdown of law and order within the campus, and ensure that infrastructure construction going on in the campus is not stopped.” He stated.
He further revealed that since the past ten years the university has developed tremendously and ranks one of the best among its contemporaries. Stressing that more still needs to be done especially in the area of infrastructure, faculty clinic, staff offices, students hostels, and roads e.t.c.

Prof. Elom appreciated the President Muhammadu Buhari for yielding to the demands of ASUU and JACTU by approving the Presidential Visitation Panel and prayed that the implementation of their findings and recommendations will go a long way in identifying and solving some of the intractable challenges in Nigerians university system.

Speaking the Chairman of the seven man panel, Ambassador Usman Sarki, stated that the major purpose for setting up the Panel by President Muhammadu Buhari was for fact finding on challenging issues in Federal universities and not to witch hunt the institution. Adding that the period of the exercise will last 60 days. He promised to be factual and make comprehensive report to the President.
“We promise that our findings will be factual not partial and in the end, we will make comprehensive report to the President,” the chairman said.
Many bared their minds during the town hall meeting with the visitation panel and prayed the outcome of the panel will provide a lasting solution faced in the institution.
Among those who spoke include Dr. Ogugua Egwu, Chairman of Academic Staff Union of Universities, AE-FUNAI chapter, he stated that the union was ready to support the panel in ensuring that every wrong in the school was corrected.
According to Egwu “We must give the panel the support, while we pray that the outcome of the visit will bring solution to the problems in the university.”
Emmanuel Chiagbata, Chairman of the Senior Staff Association of Nigeria Universities in the institution, urged the panel to make recommendations on poor salary and infrastructural decay in the university system.
Chief Okeagu Ogadah, a Traditional Ruler from Alike-Ikwo, said the inauguration of the panel was a welcome development and noted that its presence in the institution was timely.
Ogadah appealed to the panel not to be partial in its findings in the efforts to improve the nations university system.
Engr. Udom Hezekiah a representative of the host community appealed to the panel to make recommendations on the university’s social responsibility, alleging that it has failed to live up to its expectations in relocating and employing members of the host communities.