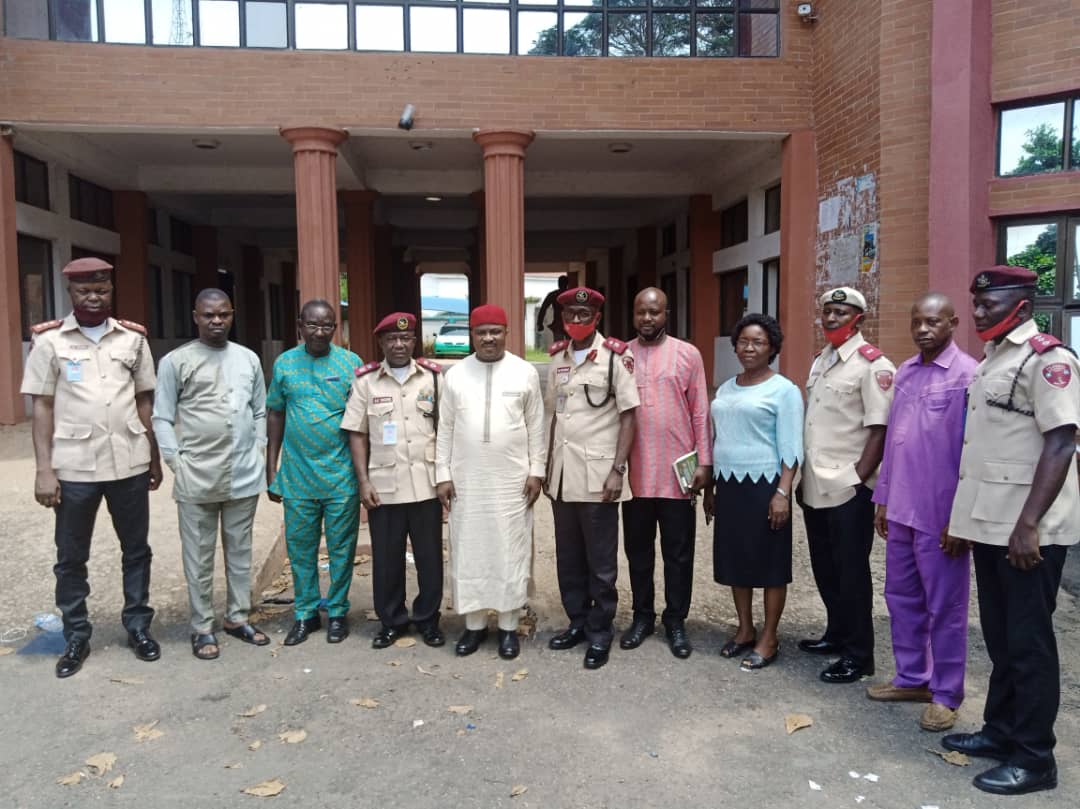 In a bid to reduce the alarming rate of road accidents and street light violation in Ebonyi State, The Ministry of Information and State Orientation has said it will synergize with the Federal Road Safety Corps (FRSC) for effective advocacy, education and enlightenment on road safety in the state.

The Ebonyi State Commissioner for Information and State Orientation, Barr Uchenna Orji said this while receiving officers of the Federal Road Safety Corps Ebonyi state command led by the new Sector Commander, AK Okorie during a courtesy visit to the ministry on Wednesday.

Orji said the Ministry appreciates the disposition of the command to partner with the ministry to effectively police the entire state towards accident free roads.

He stated that the Ministry was always disposed to working with the Federal Road Safety Corps to ensure that the very essence of the Corps was actualized in the state.

According to him; “Understandably the federal road safety commission is a federal government establishment that is working with the various states of the federation to ensure that the very mandate of the Corps were achieved”

The Commissioner disclosed that the Ministry understands the importance of the commission and was better positioned to collaborate with it as an orientation giving organization of the state government through which the needed, etiquette and proper discipline would be taught and given to the public.

He stated that going by the core values of the present administration, coupled with its total commitment to the infrastructural transformation especially in the area of Road construction the work of the commission was already made easy.

“What is important now is for the road users to cooperate; whether they are coming from outside or living in the state” he said.

He stated that no other agency has the responsibility of controlling traffic apart from the commission and so needed to be assisted in discharging the onerous function in such a manner that people will be obedient to the regulations.

Mr Orji expressed the confidence that with the new Sector Commander, accidents will be reduced on Ebonyi roads and charged them to extend their operations to the local roads, and to collaborate with other volunteers in discharging their duties.

He charged them to interface with the State agencies and effectively police the roads by ensuring that road users obeyed traffic lights and other road regulations in the state, noting that the command was a critical partner in the development of the state.

Commander Okore said he was pleased to be accepted to collaborate with the State Government in the duties of saving lives.

He applauded the existing relationship between his predecessor and the state government, and disclosed that following his observation on the level and speed of development in the state, Ebonyi was now a state to beat.

He expressed hope that the meeting with the Ministry would yield best results if recommendations of the meeting were adopted.

He sought for partnership with the Ministry through related publicity and other effort in complying with traffic rules such as obedience to traffic lights and wearing of helmet.