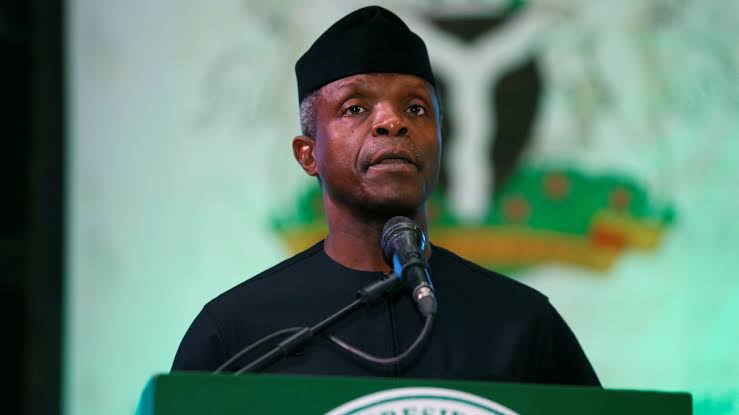 The Vice President of Nigeria, Prof Yemi Osinbajo has assured Ebonyians of the Federal Government’s concern over the multiplicity of insecurity ravaging the  state and country and is committed to restoring peace to the troubled areas.

VP Osinbajo stated this during his visit to ebonyi on Easter Sunday, 4th April, 2021, to sympathize with the victims of herdsmen attack in Egedegede and other communities, in Ishielu local government area of Ebonyi state.

He said that the Federal Government was working with security agents to fish out perpetrators of the heinous crime and ensure that they are  prosecuted as he called on the political class and citizenry in the state to partner to return peace and security of the country.

“On behalf of President Muhammadu Buhari on whose behalf I am here, we condole Ebonyi people over the killing in Egedegede. Obegu and Nkalaha communities, and also Effium and Ezza Effium”

“This killing must be condemned in the strongest possible terms, nobody should defend the killing,  we are concerned that innocent people were killed in the crisis, women , children”

“It is very sad, terrible, unacceptable ,

“It is the duty of each and every one of us to maintain the peace, Federal Government would beef up security in the war-torn community.

“More soldiers have  been deployed in the communities, the Federal Government would do more

Professor Osinbajo reiterated that the Federal Government would deploy relief materials to assist the displaced persons.

“In the meantime, relief materials would be sent to the displaced persons whose houses were destroyed”

He called on the waring parties in the raging communal crisis in Effium Community in Ohaukwu Local Government Area of Ebonyi State to sheath their swords and give peace a chance.

He said the president Buhari-led government was concerned about the killings and destruction of people’s source of livelihood in the crisis, and conveyed Mr President’s condolences to the victims.

“Hundreds of people lost their lives, business and means of livelihood destroyed, Mr. President was particularly concerned about this, for the families of those who have lost their lives, you should please accept the condolences of the Federal Republic of Nigeria.

Earlier in his remark, Governor David Umahi  revealed that herdsmen have allegedly asked their colleagues in some parts of Ebonyi to vacate the area that they want to lunch another attack after they killed over 20 people on Monday, March 29, 2021in Ishielu..

The governor sternly warned that such attack should better not be attempted because, according to him there will be grave consequences and resistance.

He said: “But it’s very annoying Sir, that some herdsmen in some parts of the state are being asked to quit because they want to attack again. This is one attack that must never be attempted, because as the chief security officer, I’m reporting to the federal government that I might not be able to control it.

“Let this madness stop, no one has the monopoly of violence. We assure the federal government that there will be no retaliation on this, believing that justice will be done. What was provided this afternoon in the way of information is good enough to unravel what happened.

The governor said that the Ishielu communities which were recently attacked provided the Vice President with information extracted from the phone of one of their attackers which was picked at the scene of attack.

“I am told when we visited over the attack that the murderers left a telephone, even three days later, the telephone was still ringing and I am happy that what the communities have been hiding from government, they have given it to you and I am told it contains the call logs, it contains pictures of the murderers, it contains their contacts; who are they calling, who is calling them? Your Excellency, these things are enough to get these people apprehended.

“If government fails to do something sir, it will be on record that the people did their best by providing these very vital information. The killers are not hidden, they are there sir with their pictures, the call logs. I am told there is a particular person they were calling, they call him Bishop Frank Shakespeare, and they called him before the attack, called him after the attack. Your Excellency, I am told there are over 50 contacts there, there over 50 call logs there.

“Your Excellency, we have made all effort to make peace between the farmers and herders in this state and by extension in South east, they have a platform that involve even the herdsmen even in our local governance. There is no name the governors of south east are not being called, they call us cowards and all kinds of names because we know there is need for peace in this country. We know that one crisis in any part of this country can degenerate to a very serious civil war, we don’t want another civil war in this country but it is in the hands of everybody”, he added.

Umahi further called on the Federal Government to approve State Police to enable the States combat security challenges facing them. He also announced that local vigilantes have been set up to provide internal security in all parts of the State.

He appealed to the Federal Government to make funds available for the resettlement of those whose households and means of livelihood were affected by the attack, as well as the Ezza, Ezza-Effium communal war victims.