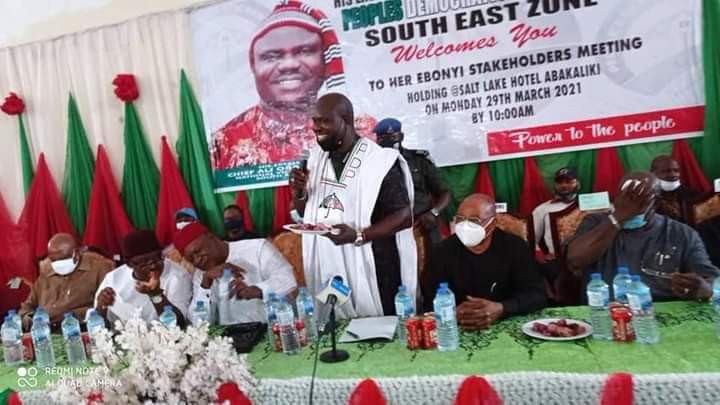 The big wigs of the Peoples Democratic Party (PDP) in Ebonyi state Monday coverged in an enlarged stakeholders’ meeting of the Party held at Salt Lake hotel in the capital city Abakaliki.

The meeting which was aimed at the teeming members brainstorming on victory come 2023 after the party had been taken over since its infiltration from the Nwebonyi led faction who left to the All Progressives Congress (APC).

In his remark, The South-East Vice Chairman of the Peoples Democratic Party Chief Ali Odefa, urged the party faithfuls to go about their lawful political activities and shun any form of fear and intimidation from the ruling party in the State.

He assured members that the PDP was even more stronger at the national level, and had the better chance of producing the president of Nigeria in 2023.

Odefa noted that the PDP in Ebonyi State, parades the people who win elections in the State, and would lead the party to victory in 2023; adding that they were happier since the exit of Governor Umahi from the party.

He said,“I want to assure you that our party is stronger. At the national level, we are even stronger. We have the best chances of producing the President of this country. Haven’t you seen that when the people who are originally not with us left, we are all happier together now.

“Everybody here are people that can win elections in their places. Let me give you an instance, you cannot go to Ivo LGA where the Oshimiri (referring to Senator Anyim Pius) hails from and say, you will win election there, without him? Who are you? In Onicha LGA, I’m there, Hon Linus Okorie and Ifeanyi Chukwuma Odii are there; who else? It’s a simple mathematics. It is not all about shouting and saying, I will crush you. We have grown beyond that era. And so, I want to encourage all of you, do not be intimidated.

“I want to let you know that the whole people you see in this place are the iron gate. We have removed the iron from that gate. The iron is here now. Wetin de there now na ordinary gate. So, do not be afraid. Call your meetings and mobilize your people, they will not do anything.

“The people (referring to APC members) they went there to meet, they are already showing the traits why we are not comfortable with them and they are not happy with them.

“That party, I don’t want to mention the name, is an Indian ocean with hungry sharks. So, they will not succeed there. They are on their way to APGA. One advantage we have over their party is that we will democratize primaries in our party. Everybody will have level playing field to contest any primaries. Whether you are my friend, whether you are my ally, go to the field and test your popularities.”

Meanwhile, the Caretaker Chairman of the PDP in the State, Chief Fred Udeogu, called on Governor Umahi, to stop unleashing violence on members of the party.

Udeogu said, “you may wish to recall that when Governor David Umahi defected to the All Progressives Congress (APC) on November 18, 2020, no single member of the National Assembly from Ebonyi State or any critical PDP stakeholder defected with him. He then boasted that he will make the PDP unworkable and unviable. Violence was visited on our members and several court cases were clamped down on our party and its officials. In fact, our activities were constantly disrupted.

“Governor Umahi commissioned Barr. Onyekachi Nwebonyi, his political hireling and surrogate to undermine the activities of our party, but today we are happy and pleased to note that we welcome the latest development which is the withdrawal and resignation of Barr. Onyekachi Nwebonyi from the PDP, thereby bringing to an end all the machinations which had hitherto created problems for our party and its teeming members in Ebonyi State.

“From now onwards we have taken back our party and we hereby pledge to ensure that all out teeming members are united to work assiduously for victory come 2023.

“We hereby plead with Governor Umahi to facilitate a peaceful surrender of our party Secretariat which his hirelings had attempted to occupy and vandalize.

“Let me also use this opportunity to urge Governor Umahi to rethink the violence that has been unleashed on the State since his defection. The spate of politically motivated killings across the state is condemnable and unacceptable. We urge the Governor to take steps to stem down this unwarranted violence in the interest of our dear State.