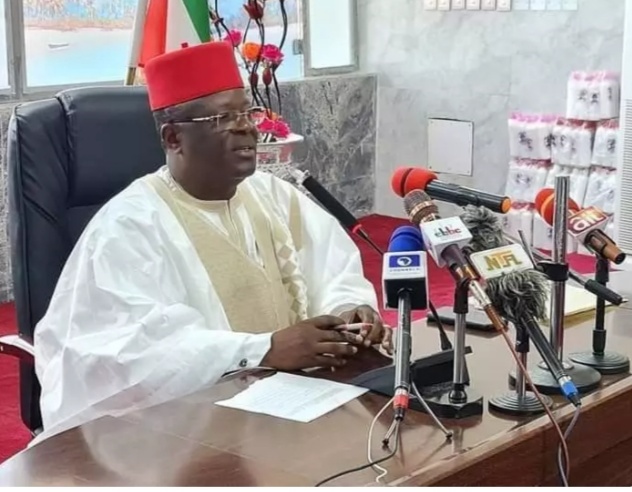 The Governor of Ebonyi state, Engr. Chief David Nweze Umahi has condemned the killings of protesters and the destructions of valuable properties across the country.

The Governor made the call while responding to questions from journalists during his inspection tour of some damaged Police stations by hoodlums in the guise of #EndSARS protest on Friday,October 23, 2020.

Gov Umahi, appealed to the youths to end the protest, insisting that the country needed to move forward after the killings and destruction of valuable properties.

The governor urged the youth to particularly, forgive the “unwarranted and regrettable” shooting of unarmed protesters at Lekki Tollgate, Lagos, as the south-east leaders were pained over the incident.

Adding “Our hearts go to the families of the deceased, and we enjoin the Federal and Lagos State Governments to quicken investigation into the incident.

“It was an act of the devil and the infrastructure being destroyed across the country are for you as leaders of the future.

“You need to be alive to actualise this future because some of you will be presidents, governors, lawmakers and ministers among others.

“No one lives on earth forever, so, we seek your forgiveness so that we will go back to the drawing board,” he said.

Gov.Umahi also emphasize on the need for national conference. He observed that a National Conference would afford the nation’s leaders, elders and the youths the opportunity to share their views and grievances at a roundtable, would greatly douse the rising agitations in the country.

He stated that while the leaders should be held accountable, the youths on their part should learn to reasonably engage the leaders.

The Governor decried as pathetic a situation where the youths of the country could not provide leaders to represent them during their recent #EndSARS protest across the country, describing it as a sign of eroded trust, which portends danger to the future of the country.

While advising the youths to build trust in and among themselves, he encouraged them to take advantage of elections to uproot bad leaders out of the system.

He insisted that State Governors should also as a matter of importance institute such conferences in their domains, where the youths and elders shall be involved in allocation of the economy of the State
Stating : “But honestly, I feel that there is the need to have a National Conference and State Conference in each of the states.

“It is important that the youths will come to a roundtable with the elders and political office holders because there is a lot of misinformation. People think that a leader must make magic.If you are building infrastructure and empowering people, they will say no.

“They prefer to just share the money.“But I want everyone to understand that we can’t survive without everyone making up his or her mind that we must all work.

“I think politics has killed us in this country: graduates no longer want to work, even Doctorate degree holders want to be local government councillors.

“Our Elders, how many of them are willing to remember the younger ones? Just imagine, when we asked the young protesters to give us leaders, they said no.

“When I asked why, they said the leaders will take bribe. Then it portends danger if the young ones are not able to elect their leaders.

“So there is need for a national conference. That is my suggestion for this agitations….

“The system has gone bad. This is very important, and if other States are not doing it, I am going to convoke youth and elders summit in Ebonyi early next year so that we sit down and harmonise….”

The Governor particularly beckoned on the youths of the State to take advantage of government investments in agriculture, infrastructure, commerce and industry to improve their economic wellbeing.

He said: “We have a lot of Rice Mills. How many youths can come together and bid for it?

Even if they don’t have the money, we will do it for them. We have many Cassava Plants we did, and nobody is taking it. We have one man, one hectare of land programme, which one can take advantage of.”