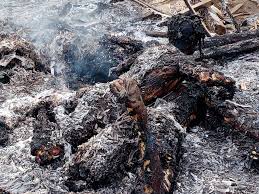 The suspects which included the first son of a late Traditional Ruler in the area were accused of vandalizing Transformers in Igweledoha, Ndufu Amata and Ekawoke all in Ikwo.

An Eyewitness who did not want his name mentioned explained that the suspects by 2am on Friday 18th November were caught with some Transformer parts.

He noted that they were five in number but two escaped while three including the son of the Traditional Ruler were meted with jungle justice.

Asked why the suspects were not handed over to the police by the community, the eyewitness explained that they were afraid that police would release them after a while there by returning to continue with their nefarious activities.

When contacted, the Police Public Relations Officer in the State, Mr Chris Anyanwu said he was yet to receive the report but that he would confirm it as soon as that happens.