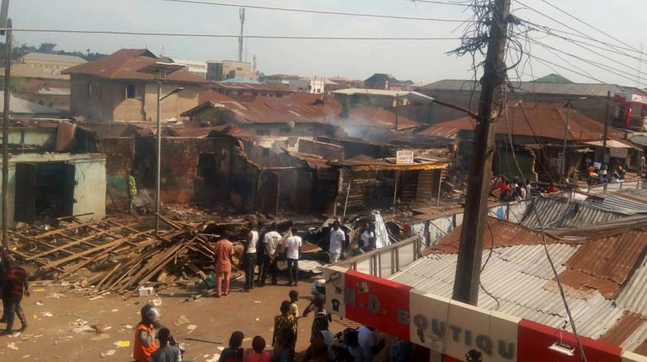 Multiple shops, including pharmacy stores and warehouses were in the early hours of yesterday, Sunday, 8th  November, 2020 was razed by fire in Akure, Ondo State capital, destroying goods and properties worth over N300 million. 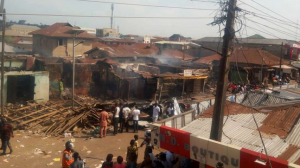 Not less than 10 shop owners in Akure lost their goods and properties in the inferno that lasted hours. Aside the massive destruction, some persons sustained various degrees of injuries.

The Voice gathered that one of the victims, simply identified as Alhaji, is currently on admission at a private hospital, after experiencing heart attack when he saw his two medicine stores in flames.
Alhaji, who owns Choices Medicine and Stores at No. 20, Ijomu Street, Akure, was said to have just offloaded two truckload of drugs on Saturday night.

Another victim, Mrs. Modupe Daramola, who is a fashion designer, lost three industrial sewing and embroidery machines, and four sewing machines.
Daramola disclosed that she also lost a heavy-duty power generating set and a refrigerator to the fire besides several fabrics belonging to numerous customers.

It was alleged that calls put to the officials of the state fire service by residents were initially ignored, until some government functionaries were contacted.

Although the source of the fire incident was unknown, it was speculated that it might be as a result of power surge from one of the shops.
Speaking on the incident, one of the youth leaders in the area, Sola Omorege, said it took their communal effort to put out the fire, though they could not rescue any of the items in the complex. He lamented that the fire service in the state could not help when they went to their office on a motorbike due to lack of functional equipment.
The Edemo of Akure Kingdom, High Chief Folabi Fayehun, said that he contacted the Akure fire service through a firefighter in Ilesa, but they complained that they had no functional equipment and could not help.

Fayehun alleged that he also contacted the Akure Airport Fire Service but was told it was out of their jurisdiction, except the governor requested for their service. He lamented that millions of naira, in goods and property, were lost to fire incidents in the state due to non-availability of fire-fighting equipment.

While receiving the governorship candidate of Peoples Democratic Party (PDP) in the October 10 election in the state, Mr Eyitayo Jegede, who came to inspect the scene of the incident sympathised with victims, Fayehun said it was the youths and residents of the area who scooped water from blocked drains to put out the fire.

The Akure High Chief condemned the lackadaisical attitude of the state government and fire service authorities towards perennial fire incidents in the state.

He said, “When we experienced this kind of incident at Oba Nla, a couple of months ago, the governor was there. I think there is need for government to have fire-fighting equipment on ground because this is becoming a recurring situation, where people lose multi-million naira worth of goods and property to fire incidents.
“If FUTA can have fire fighting equipment, likewise Akure Airport, why can’t a whole state have a functional fire equipment, especially in the state capital? This is unfair. If there is fire outbreak in Akure, do we have to wait for Ilesa to come and rescue us? See what happened to us with a whole office complex razed without any help. The loss is too much to even comprehend. Government should be in a position to come to the aid of the people,” the Akure chief said.