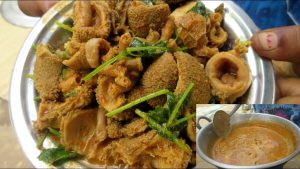 One Chinwekpe Orogwu is now cooling off his feet in police cell after he was accused of clubbing his brother, 20year-old Ebubechi Orogwu, to death over goat intestines.

The said goat was killed in their compound and some parts of the goat meat were shared and the intestines were given to Chinwekpe and his brother.

The duo were enjoying the already cooked goat intestines when trouble ensued. Chinwekpe accused the deceased, Ebubechi, of eating a greater portion of the delicacy and out of anger he rose up, grabbed a wooden pole close by and landed it on his brother’s head.

There was chaos in the compound as neighbours quickly rushed to the scene, carried collapsed Ebubechi to Alex Ekwueme Federal University Teaching Hospital Abakaliki, hoping he would survive.

But unfortunately, a medical doctor on duty certified him dead after examining him.
The deceased was taken back to Ikwo where his corpse was deposited at Ikwo general hospital.

“The suspect claimed that the victim reportedly ate more intestine. The victim was rushed to Federal Teaching Hospital Abakaliki, for treatment but he was confirmed dead and his body was deposited at Ikwo general hospital while the suspect has been arrested.

“The matter is under investigation because we can’t believe that it was because of goat intestine that someone killed the brother”.