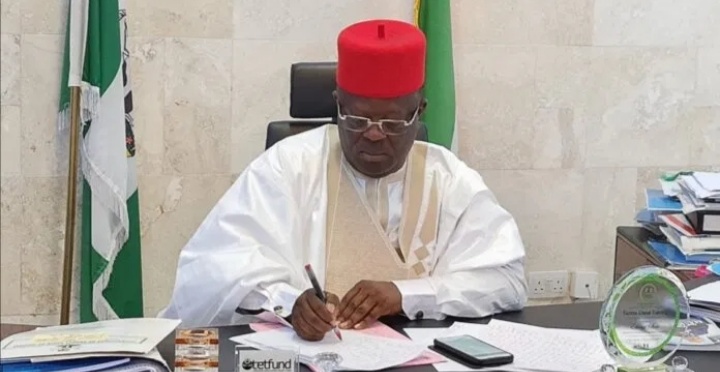 Ebonyi State Governor, David Umahi have approved the construction and extension of major roads in Ikwo Local Government Area of the state.
Elder Steve Orogwu, the Council Chairman disclosed this on Wednesday, at Onuebonyi Echara, the Council headquarters, during a dinner to mark his one year in office.
The affected roads according to Elder Orogwu include; the extension of Item – Amagu Road on concrete pavement, Construction of Onuigboji Imogo – Igbudu Road on Concrete pavement, Construction of Igboji Market Ndechi Ekpaomaka Road on concrete pavement, extension of Ojon Market Road to Ukwu Mango on Concrete Pavement and extension of Elugwu Enyim Road to Ndiova Ndufu Alike on concrete pavement.
The council chairman noted that the above mentioned roads were not part of the Ring Road that has since commenced in some parts of Ikwo Local Government and other Local Government Areas of Ebonyi State.
He appreciated the state Governor, Engr David Nweze Umahi for his infrastructural drive in State which Ikwo has been a big beneficiary.
He stated that it is on record that some motorable Roads in Ikwo today, were  constructed by  Governor David Nweze Umahi and his Deputy Barr Eric Kelechi Igwe.
Elder Steve Orogwu maintained that Under his administration as the Executive Chairman of Ikwo Local Government Area, the council has witnessed and still witnessing tremendous developments ranging from Road Construction, Restoration of Peace in Ikwo, Regular payment of worker’s salaries, Restoration of Electricity in Ikwo, Construction of Bridges and culverts, Human empowerment among other areas.
He expressed hope that the deplorable condition of the Road Network in Ikwo will soon be a thing of the past.
Orogwu called for massive support of his administration under the leadership of Engr David Nweze Umahi and his supportive Deputy, Barr. Eric Kelechi Igwe for the council to get more dividends from the administration.