The newly sworn-in Coordinator of Ivo Development Centre, who was the immediate past Technical Assistant to the Governor on Student Affairs, Comrade O.O Daniel has unveiled his agenda for his first term in office.

Daniel on Thursday, August 22, 2019 invited Pastor Eunice Oyeyemi who dedicated his office to God before he officially assumed duty. 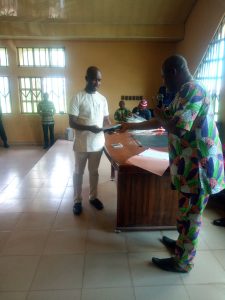 In her speech, Pastor Oyeyemi told the people that God has remembered the Development Centre by given them a man who fears Him.

Stating, “I know the coordinator very well, I know his capacity and I know what he can do. He knows God and he will definitely bring light to this Development Centre. He will rule with the fear of God because he knows God”.

She said that during the coordinator’s service as TA on Student Affairs, that he did marvelously well, that he was the most vibrant of all the appointees.
Mrs. Oyeyemi pointed out that in few years to come those in the Development Centre will testify of the light that God has given them in the person of Comrade O.O Daniel.

“He loves people, and God has blessed him. Give him all the support and cooperation he requires and you will see what will happen in the next few months”, she added.

The Pastor told the coordinator that God has given him the opportunity to prove himself, charging him to live up to expectations, while praying God to give him the wisdom and understanding he requires to do the job.

Earlier, Chairman of the Council Hon. Ogbonnaya Chukwu-Ude, officially handed over the Ivo Development Centre documents to the Coordinator.

He assured Comrade Daniel of his support for him to succeed by creating enabling environment for him to operate.

Hon. Ude said he has worked with the coordinator right from when he was a student leader, and during the Divine Mandate days, adding that it was his hard work that landed him the present position he is occupying.

On his part, the coordinator who appreciated the crowd that graced the event, including the student community, unveiled his agenda as he official resumed office.

The programmes were categorized into five areas and they are Security, Agricultural Empowerment, Trainings and Supportive Supervisions, Social Service and Environmental Sanitation.

On security, he will be looking into alternatives to cultism, Umahism, one youth one skill initiative, Akubaraoha Students Mental Adjustment Programme (ASMP), consultative and monthly stakeholder’s security review meeting/banquet.

On agricultural empowerment, there will be the establishment of Ivo farms, operation show your farm (Civil Servants inclusive), operation the bigger your farm “the more stake you hold” (stakeholders) and operation one community twenty cooperatives societies (Agric loan).

On Trainings and Support Supervisions, there will be periodic leadership training for civil servants, monthly consultative meeting with health care workers and head of schools, supervisory visit to PHCs and schools to ascertain functionality, annual performance award for dedicated staff from various sectors, effective and steady supervision of all government projects and introduction/monitoring of attendance register.

On Environmental Sanitation, there will be operation make Ivo green again and queuing into state monthly cleaning exercise.
Highlights of the event was hoisting of flags, and lunching of Ivo plantain plantation which was carried out by Pastor Oyeyemi.

He noted that though his programmes are lofty but with Gods help and support and cooperation of his people, they are achievable.