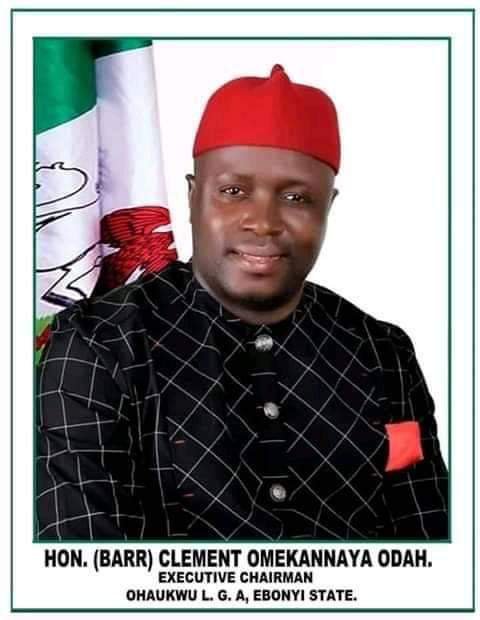 …Holds church thanksgiving to mark his victory 6days before election

The Chairman of Ohaukwu local government area of Ebonyi state, Hon. Clement Odah, has told his supporters not act violently against his opponents in any way as regards the forthcoming local government election.

Odah gave the counsel on Tuesday while reacting to a recent protest by some youths from the area who said they don’t want him to return back as Ohaukwu council chairman.

The Ohaukwu council boss said he doubts the identity of those who protested, reiterating they are not from his local government.

He acknowledged that he knows those propagating the protest, adding that they have seen how God will grant him victory and decided to rent few students to carry out a protest.

“What you see on the social media is not qualified to be a protest. That is not a protest and nobody in Ohaukwu witnessed any open protest in any of our high ways.

“Somebody sent me a link on WhatsApp that people had a placards with a number of things. I looked at it, a few disgruntled elements, I doubt whether they are from Ohaukwu.

“They don’t look familiar at all. But wherever they may came from, I believe that they are a paid rented group of disoriented young men who don’t know what they are doing.

“I also know the propagators of such miserable outing. Definitely, a few persons who may not be happy with the chairman may have done that. I enjoy the support of over 98 percent of the stakeholders of Ohaukwu LGA and that is a fact” he averred.

Odah reaffirmed that he has the support of Ohaukwu stakeholders, youths, traders, market women and all those who matter in the local government area.

“All the stakeholders and teeming number of youths are with me including the market women and traders. All the traditional rulers, town unions, the clergymen and all other people that matter in Ohaukwu are with me. And so, the insignificant two percent doesn’t matter to me.

“This insignificant number may have seen how God will grant me victory and became restless to the extent of renting some strange students from neighbouring institutions to carryout a cowardly act of protest.

“They made efforts to see our leader at Umuebe but they were rebuked and sent back shamelessly. And so, there is no protest to the best of my knowledge”

“No reasonable youths from Ohaukwu will protest against me because I have liberated them. And i assure you, if i run for election twenty times, they will vote for me twenty times because I have touched their lives uniquely ” Odah added.

Also, the Ohaukwu council boss on Sunday, February 16, held a church thanksgiving celebrating his victory in the yet to be conducted local government election in Ebonyi state.
He said his project is divine and that the thanksgiving was to show his gratitude to God.

“My project is divine and if you see my campaign poster, it has the inscription “Power belong to God”. I am not struggling with anybody. The position was given to me by God, using divine agents.

“Secondly, the election we are anticipating to hold coming Saturday is a delegate election. The list of the delegates is already known. The delegates are my friends. They know me and I know them. They trust and believe in me. I believe in them also. I believe, I will have their votes.

“So mathematically, I’m absolutely sure that I will win in a landslide version, it is that conviction and the fact that God is on my side that gave rise to thanksgiving, which is an act of gratitude to God.

“I am absolutely so sure that I will win the election. I have the conviction within me that as God is on my side, the delegates will vote for me.

Meanwhile, the local government election has been slated for April, 25, 2020 across the 13 LGAs and 171 political wards that make up the state.
Whilst the delegate election will be held on Saturday, February 22.