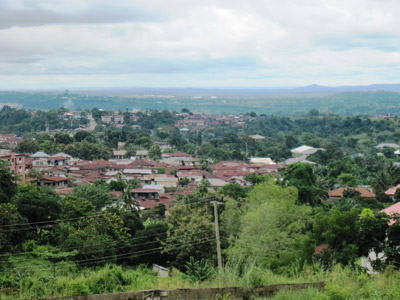 It was an atmosphere of pandemonium on Tuesday at the state House of Assembly Nkaliki, as the lawmaker representing Afikpo South Constituency, Hon. Nkemka Okoro Onuma, swayed his thugs to beat up a pregnant female journalist, and other state correspondents at the assembly premises.

The mayhem which occurred during the first day of the screening/confirmation of the second batch of commissioner nominees sent to the state Assembly by the state governor, Engr. David Umahi, started when Mr. Emegha was screened by the Assembly after his name was forwarded to the House for screening and possible confirmation by Governor David Umahi.

Mr Emegha’s screening was fraught with some irregularities as the Speaker of the House Francis Nwifuru noticed that the year of his graduation from Primary School did not tally with the year he started secondary school on his documents.

So after the incident on the floor of the house, Journalists wanted to interview him (the commissioner nominee) who was the immediate past Special Assistant to the Governor Umahi on Abakaliki Capital City, but Mr. Nkemka, who represents Afikpo South West, came and took him away to the office of the Speaker.

Later, Mr. Nkemka emerged from the office and some Journalists led by Samson Nwafor, Nigerian Pilot correspondent in Ebonyi went to complain to him about the way he prevented them from interviewing Mr. Emegha.

“On getting there, the lawmaker threatened to slap Samson, as he was shouting on top of his voice, his boys joined him and attacked Samson, hit him very hard on his chest and he fell down,” they also attacked the pregnant female journalist who was there with them by hitting her on the stomach.

“At this point I intervened and joined in separating the fight. The noise also attracted some Police Officers posted to the Assembly who came and helped to restore calm. Later Mr. Stanley Emegha came and pleaded with the journalists to forgive the lawmaker and the thugs who attacked them, Anioke narrated.”

He further stated that at that point one of the thugs who were with him came and started shouting again that the journalists can go and write whatever they want.

“He also threatened to beat us up and warned that we should leave the place. At that point I became unconformable and made to enter my car but his boys came and held my car door and dragged me out. One of them came from the back and hit me on the back of my head while others joined in the beating”

“I managed to extricate myself from them and entered my car, this time Mr. Emegha himself came and held my car door pleading with me. I started the car nonetheless and drove off forcing him and others with him to leave the door”

“But as I got to the gate, they told the gateman to lock the gate and not to allow me to leave. They swamped around my car and were trying to forcefully open it but they couldn’t. Some were hitting the glasses with their hands trying to break it. At that point, the Chairman of Nigerian Union of Journalists, Mr. Tony Nwizi came and told the security men to open the gate which they did and I managed to escape to safety, he added”.

Mr. Anioke, sustained injuries to his mouth and hands from the beatings he received from the thugs.

On his part, Mr. Nwafor Samson, of Pilot Newspaper, stated: “We were interviewing Mr. Stanley Okoro, Emegha, one of the commissioner nominees after screening when the lawmaker moved him to his office. All of us were embarrassed.

“So, when they came out of his office, we decided to approach him to express our displeasure over the manner he dragged him out and he got infuriated and threatened to slap me.

“I told him it has not gotten to the extent of slapping anybody but before we could know it, his thugs numbering about 20 descended on us. It was as if he came prepared to attack us.

“As the thugs were attacking us, the lawmaker quickly moved back to the chambers to join the screening of the remaining commissioner nominees”.

Meanwhile, the           National President of the Nigeria Union of Journalist, Chris Isiguzo, condemned the attack on journalists and demanded that the leadership of the assembly apologies to the affected journalists.

“It is totally unacceptable to us and we demand that Ebonyi State House of Assembly should not just apologies to those that were manhandled; they should also make sure that they are taken care of in the hospital. So they should take care of their bills and assure us of their safety in that House of Assembly” He said.

The state chapter of the union also condemned the attack It expressed shock that a lawmaker, alongside his thugs, attacked journalists who were at the assembly to cover the screening of commissioner nominees.

The Union asked the assembly to compel Onuma to tender unreserved apologies within three days from the date of the incident; otherwise it would direct its members to boycott activities of the house.

Responding to the letter transmitted to the house by the NUJ concerning the incident, the Speaker of the House, Rt. Hon. Francis Nwifuru stated “My dear colleagues there is a letter before me from the Nigeria Union of Journalists, complaining of attack, intimidation, molestation by some members of Ebonyi State House of Assembly to the journalists they sent.

“I wish to use this opportunity to apologize to the journalists; having mentioned some of my honourable members here that they attacked them. Whether they did or not I apologize and I say forgive us. We are politicians and you should also remember that”.