Ebonyi State on Tuesday, witnessed  total lock down following the sit-at-home order issued by the Indigenous People of Biafra (IPOB) as a result of the ongoing trial of its leader, Mazi Nnamdi Kanu, by the Nigerian government.

IPOB ordered the sit-at-home order to identify with its leader, who was scheduled to appear in court on Tuesday January 18, 2022.

THE VOICE correspondent, who went round the state on Tuesday observed that economic activities were grounded, while the roads were empty. 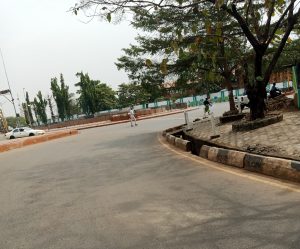 In Abakaliki, the Ebonyi State capital, banks, schools, markets, filling stations and shops remained closed, as only two kiosks inside the street opened for business.

Some of the major roads visited such as Waterworks, Ogoja, Azugwu, CAS Campus, New Market, Union Bank/Government House roads were all deserted as only few tricycle, motorcycle and few cars were seen plying the road.

Besides, only few security men were seen in Abakaliki town, and some persons who came to withdraw money through ATM.

At Government House, Abakaliki, all the offices remained closed since none of the workers came to work.

In different parts of the states visited in the morning, security agencies were seen in strategic places to ensure that there is no breakdown of law and order.

Some persons, who spoke to our correspondent on condition of anonymity expressed sadness over the condition of South East, saying that the zone has faced unpresidented marginalization under President Muhammadu Buhari leadership which has crippled the economic activities in the zone thereby making it vulnerable to insecurity.

They further lamented that many lives and properties had been destroyed because of the inability of Federal Government of Nigeria to give them sense of belongings like other regions.

Recall that the leader of IPOB, Mazi Nnamdi Kanu, has been on trial by Nigerian government because of his sessesion agenda, which Nigerian government considered as a threat to the unity of Nigeria, which also led to his extradition from Kenya and consequent trial in Court.

Mazi Kanu has been on the struggle for self-determination of South East region of Nigeria because of  underdevelopment, segregation, marginalization of the zone which has generated alot of controversies over the years.