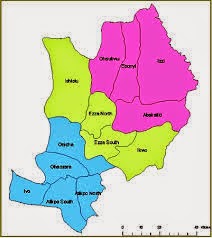 Following the dire need for trained and qualified teachers in Nigeria, the federal government under the leadership of President Muhammed Buhari has approved the establishment of six newly approved federal colleges of education, one in each of the six geo-political zones in Nigeria namely; Bauchi, Benue, Ebonyi, Osun, Sokoto and Edo states.

It is worthy to note that there are 152 colleges of education in Nigeria, consisting of 21 federal, 82 private and 49 state colleges of which while selecting the States, the federal government put into consideration states that do not have any federal college of education, among which Ebonyi State was chosen and its site to be located at Isu in Onicha local government area of the state.

The jubilation of this selection was killed by clannish interests who seek to frustrate the establishment of a new federal college of education.  As the former governor of the state, representing Ebonyi North Senatorial District in the National Assembly, Dr. Sam Egwu, on May 19, 2020, tendered a petition by Izzi Nnodo people on the floor of the Red Chamber seeking relocation of the school from Ebonyi South zone to his area which happens to be Ebonyi North area of the state. In addition to this, the Ebonyi North Elders Consultative Assembly also went ahead to petition President Muhammadu Buhari in an open letter published in two national dailies of June 2.

However, the major argument of Ebonyi North stakeholders was focused on the siting of the institution in Onicha LGA of the state against the federal character principle. According to them, two of the three federal tertiary institutions in the state, Akanu Ibiam Federal Polytechnic, Unwana, in Afikpo North Local Government Area, and the Federal College of Agriculture, Ishiagu, Ivo Local Government Area, already exist in the zone.

They pointed out that the third institution, Alex Ekwueme Federal University, was located in Ikwo Local Government Area in Ebonyi Central Senatorial District, while their zone was left with none.

In their words “For the sake of justice, equity and fairness in the distribution of federal tertiary educational institutions in Ebonyi State, we pray that the President intervenes by prevailing on the Federal Ministry of Education to rescind its earlier decision on this issue and approve the siting of the college in Ebonyi North Senatorial District.”

This prompted the reactions of elders of Ebonyi South who fired back, stating their zone has been marginalized in the siting of federal and state government projects since the creation of Ebonyi 24 years ago. While enumerating over 50 establishments sited in the northern zone of the state to include the Ebonyi State University (EBSU), Abakaliki, School of Health Technology, Ezzamgbo, the National Examinations Council (NECO), the Command Secondary School, Abakaliki, the National Agency for Food and Drug Administration (NAFDAC) and the West African Examination Council (WAEC), among others.

Therefore, they urged President Buhari to disregard in its entirety the petition seeking to relocate the Federal College of Education, Isu, noting that entertaining it will amount to injustice and supplanting the peace that exists in Ebonyi state. Following the disagreement between Ebonyi North and South zone, the Chairman of the Senate Committee on Ethics, Privileges and Public, Senator Ayo Akinyelure, in a letter dated June 9, 2020, asked the minister of Education to convey his position on the matter to the committee to enable them “take appropriate peaceful decision on the matter.”

He revealed that the committee had, at its hearing on June 4, directed the minister through his representative to suspend action on the institution until a decision was reached by the principal stakeholders on behalf of Ebonyi people.

Indeed the siting of the Federal College of education in Ebonyi State is a welcome development, and should not be hindered by anyone. The Voice Newspaper make bold to state that the siting of this college should not divide the state, but rather unite the State. The key word should be development as our core objective in the State, ensuring that the major purpose for the siting of any federal parastatal is to draw major investors, place Ebonyi in the map, and attract more employment opportunity for our people no matter where such institution is sited.

It can be recalled in the history of Ebonyi that the siting of both federal and state projects has always been influenced by the zone in which the state governor hails from. From the leadership of ex-governor Sam Egwu the siting of Ebonyi state university was attracted in his zone, and other federal institutions which brought about the development of his zone.

Ex-Governor Matin Elechi, during his reign attracted the Alex Ekweme Federal University, Ndufu Alike in Ikwo to his zone Ebonyi central senatorial district. Now is the turn of the sitting governor who also is attracting major establishments in his zone in a bid to open up major channels of development.

Standing on equity and fairness it would be unfair to rob Onicha local government of its opportunity to host the first higher education center from the federal government as no establishment of such has been situated in the local government, despite the presence of two federal institutions in the zone.

However, being as it is, Ebonyi North is already saturated with several state and federal institutions. These include the Alex Ekwueme Federal Teaching Hospital, Abakaliki, the National Obstetric Fistula Centre, Abakaliki, the Federal Government Girls’ College, Ezzamgbo and the proposed National Raw Materials Research Institute as well as state and federal ministries, departments and agencies. The zone also serve as a host to the state capital, hence facilitate rapid development in every area, as the zone will continuously witness the deployment of over 60 per cent of the state resources to its developmental needs. The Voice Newspaper advises that leaders of both zones to put ethnicity aside and work together for the common good of the people and the growth of the state, having in mind that with peace and unity the State would achieve more in its quest to attract federal parastatals, rather than division which would lead to backwardness, stagnation and underdevelopment of the state.