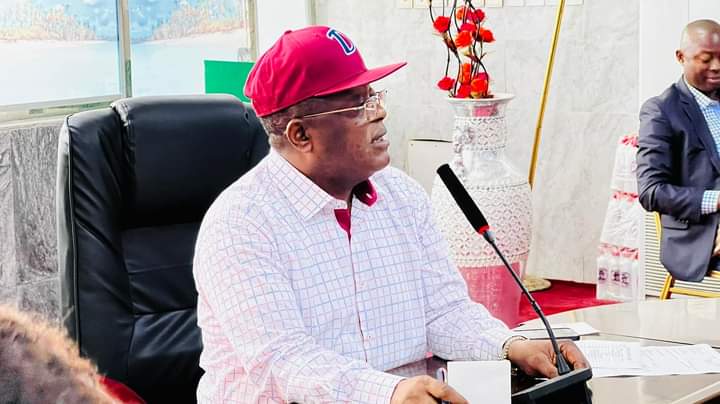 Ebonyi state government on Tuesday banned not less than thirteen (13) companies from handling any contract works from the State government over non-completion of contracts.

Orji said, the report on companies that failed to complete their UBEB contract for the year 2016, 2017 and 2018 was presented to the state executive council members today.

According to him, the details of the companies that failed to complete their UBEB contract include Another Level Enterprise Ltd,Triumphant Contractor Ltd,Head and Tail Nig Ltd, and Top Goals Ltd.

He said that “the companies above were banned by EXCO from doing any form of contract work with UBEB and State government. In other words, they were blacklisted by the State Government.”

He added that Exco has resolved to relax the revocation order and allow it commence its mining operations.

Further, the Information Commissioner said that Governor David Umahi during the executive council meeting directed that all Christmas packages and salaries must be made available to the beneficiaries on or before Friday, 17th December, 2021.

The executive council according to Orji, declared that there would be dire consequences for any MDA or Local Government which fails or neglects to the make available all approved Christmas welfare packages and salaries to the beneficiaries within the dead line of Friday 17th December, 2021.

He said that the “EXCO appraised the level of performance of the operational duties of the Ebubeagu Security in the State and commended them very highly for their efforts in enhancing the security of the State.

He said the EXCO further deliberated on their operational loopholes and level of compliance to the rules of engagement, including other conventional security outfits in the State and resolved to set up a Public Complaint Committee to look into issues of rules of engagement and infractions on human rights and to make appropriate recomendations to the Governor of Ebonyi State.

The Committee, which Orji said the executive council resolved to be constituted shall be made up of Traditional Rulers, Human Right Commission, Ministry of Justice, Secretary to the State Government and Coordinating Commissioner, Security consultant, CAN, Elders Coucil, Nigeria Barr Association, Ministry of Information and State Orientation, the Ombudsman who shall be the Secretary as the Committee members were asked to elect their Chairman.

Earlier, the Commissioner stated that the state executive council members also received the Executive Order No 6, 2021 (As amended) which intended to streamline the fees payable for the conduct of certain school examinations in Ebonyi State.

“The Executive Order deemed to have come into effect on 7th day of December, 2021 is called “Executive Order/Harmonization of Examination Fees and Examination Dates 2021” Under this arrangement, all payments shall be made directly into the State IGR account and the Chairman of PTA will present a teller to the Ministry of Education which will authenticate same with the Ministry of Finance and a Cheque of 50% of the money be remitted to the school through the PTA of the School.

“The Secretary and Treasurer of the PTA shall be signing all cheques for the PTA. Any loss of money whatsoever shall be replaced within 24 hours by the officer responsible for remittance,” he said.

He noted that the “EXCO received a report on the details of work to be done on Hausa Quarters flyover and the cost of the first phase was presented to EXCO.

“The sum of Nine Hundred and Sixty Two Million Four Hundred and Seventy Seven Thousand One Hundred and Ninety Six Naira Fifty Five (N962,477,196.55) was approved for the first phase of the Hausa Quarters Flyover project.”