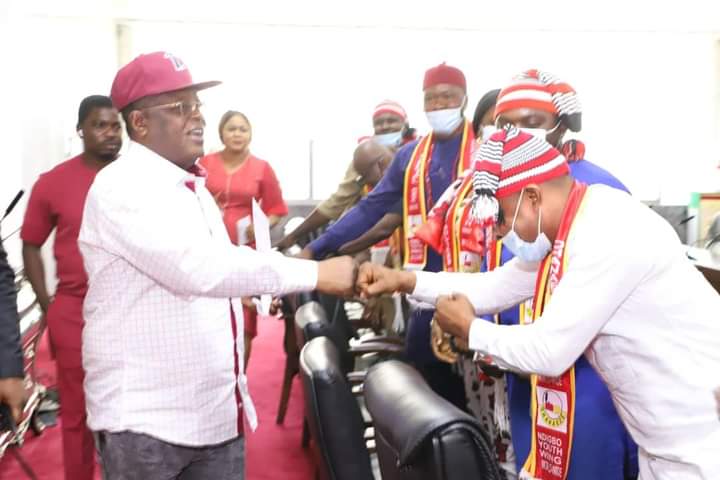 ~Urges Youth President Not To Be Partisan

The Governor of Ebonyi State and Chairman of South East Governors’ Forum, Engineer David Nweze Umahi has faulted the purported suspension of the National Youth Leader of Ohaneze Ndigbo Worldwide, Comrade Damian Okafor, saying it is illegal and unconstitutional.

Governor Umahi stated this while playing host to the Youth Wing of the Ohanaeze Ndigbo Worldwide at his Office, new Government House, Ochoudo Centenary City, Abakaliki on Monday.

He said it was illogical for a group of persons to have alleged to have suspended the Ebonyi State representative in the Body that was duly elected by the National Executive Council.

“I learned of what was happening when some people came together and said they have suspended the National Youth Leader of Ohaneze, for me, it is not correct and it is not something anybody should give any attention to, the Constitution is there, you were elected by NEC and it is only NEC that can suspend you.

“Ohaneze Ndigbo should not be politically motivated and we stand against that. Defend the course of Ndigbo, because you have PDP members and you have APC members, the moment you start defending one person, then you are now partisan and it is not right.

He commended the Youth Wing of the Ohanaeze Ndigbo Worldwide led by Comrade Damian Okafor and urged them to lend their voice to the Igbo course in 2023.

“I want you to note it and note It very well because I will also not allow you to downgrade the status of Ohaneze, you people should not attack the leaders, it is only when people are attacking the course of Ndigbo, then you have to respond and defend that.

“Let us just be decent by our cultural values to do things very decently and please be the youth Leader to APGA States, PDP States, and the APC States.”

The Youth Wing of the Ohanaeze Ndigbo Worldwide was accompanied on the courtesy visit by the Ebonyi State President of the Sociocultural organization, Chief Peter Mbam, the National Vice President, Chief Okeagu Ogada, and the National Treasurer, Honourable Beatrice Eze.