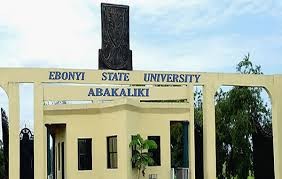 *We are only fighting for our right – NASU chairman*

No official statement yet – Management

Union Leaders in Ebonyi State University have reacted to the recent proscription of all the unions in the state institution except the Student Union Gvernment (SUG).

Reacting, the Chairman of Academic Staff Union of University (ASUU), Ebonyi State Chapter, Prof. Ikechukwu Igwenyi said that the government has no power to proscribe the association.

Prof. Igwenyi who called on the state government to prioritize University Education in the state, stated that labour matters are in exclusive list and it’s impossible for any Governor to proscribe any National Union duly registered and given a charter to operate.

“We are just a branch of ASUU and the National body of the Union is very much aware of the situation in Ebonyi”. He explained.

The Chairman who doubles as an Associate Professor and the Head of Department, Biochemistry, Ebonyi State University said the staff of the institution are being owed four months salaries.

He urged the people in government not to collapse public educational institutions simply because their children do not school there.

“Most Public office holders are not interested in our public schools nor to invest in the institution because all their children are studying overseas”.’He added.

He called on the staff of the University to remain resolute until government meets up their demands.

Dr Igwenyi therefore, urged the students who are loosing their patience to remain calm until victory is achieved.

“It is beyond the decision of any state government to take such drastic decision and he doesn’t have such power.

” The union will sit and talk about it, it is not in my position to decide. Meanwhile we are only a state chapter, the national body will take care of that, because we are only a branch of the union.

” For the union it is not a threat we know when it is a threat. ” He stated.

Also reacting to the development a lecturer of Ebonyi State university who pleaded anonymity stated that that Under the charter of university autonomy, the governor has no right to interfere in the university activities.

He has no right whatsoever to scrap the union,because every citizen in Nigeria has the right of association, and ASUU as a union is a national union that is known for fighting for funding and quality education in Nigeria as a whole.

“ASUU has never fought for their own benefits alone they have always fought for funding for university and what they call university revitalization.

” If you go to Ebonyi State university for instance, all the project going on there are product of ASUU struggle. The last struggle we embarked upon EBSU was given 3billion naira, and that was as a result of ASUU struggle.

” That money was not given to lecturers or staff, it was given to the university and all the houses there is a product of that money, including the one going on now.

” So we don’t fight for lecturers interest alone, we fight for interests of future Nigerian s, future students and wellbeing of our school.

” For Umahi to tell Ebonyians that he has proscribe the union, including ASUU, SSANU, NASU it’s a cock and bull story he has no such right.” He stated

ASUU Chairman of Alex Ekwueme Federal University Ndufu Alike Ikwo AEFUNAI, Dr Ogugua Egwu when contacted by The Voice said that the governor did not make consultation before taking such action.

Dr Egwu stressed that the Governor acted in ignorance.

“The Governor of Ebonyi State must be joking; he doesn’t have such right to proscribe a National Union. He should consult people who know better than him when it comes to ASUU and Government” the ASUU leader fumed.

“I know very well that if his children are there in EBSU, he wouldn’t have been handling such a renowned University with levity”, he further hinted.

Meanwhile , the chairman of Non academic staff union of educational and Associated institutions, Mr. Mike Nwovu corroborated with the ASUU EBSU chairman stating that it was not possible for the union to be proscribed.

He argued that the union was only fighting for their rights and what is due to them. As they have been owed for months without payment while most of their staff are being removed.

“What we are saying is that we are not fighting with him rather we are agitating for our legitimate right,what we are asking is only for our full salary, that our salaries should not be cut and our members should be allowed to continue with our normal duties.that reducing of workers at this period is very dangerous.

” That is what we are begging him, we are not fighting with him, we are only asking for these, so that we will be able to feed our family. For the past four months now, no salary in the university, we are all hungry, we are only begging him to assist the university to continue paying their salaries, for us to receive our salaries and allow us to work. I don’t know what comes about suspension of the union leaders”.

He Stated that due to the security unrest that greeted the State and country these past few days, the management is yet to issue an official statement to that effect.