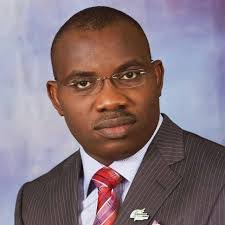 The All Progressive Grand Alliance APGA in Ebonyi State, has accused the State government and the All Progressive Congress APC of destroying the campaign billboards of the Guber Candidate, Professor Benard Odoh mounted in strategic areas in the State.

In a Statement on Tuesday, Prof. Bernard Odoh attributed the action to political intolerance, claiming that the Umahi-led administration has continued to terrorize political parties in the State, intimidating them from performing their political duties.

He added that their billboards was destroyed on Sunday night after several ‘remove ads’ notices placed on the bill boards by the state government to remove the bill boards, even when the company, Rocana Nigeria Ltd in-charge of the advertisement has paid all taxes and dues owed to the State.

Adding “the ‘remove Ads’ was as a result of our advertising handlers refusal to surrender the billboards which we had already paid for to the APC Candidate who had earlier requested for them at all cost. ROCANA are not in any way and form owing the state government .

“As law abiding citizens who understands the place of professional engagements in matters such as this, it was only incumbent that we reach out and inform the advertising agency- Rocana, which has professionally operated in the state and the entire south east in the last few decades about the “remove ads” notices placed by the Ebonyi State Government on the billboards with it’s official seal. They promised to reach the state government and get back to us as soon as practicable.

“Some hours after, we discovered that the billboards have already been torn and removed forcefully, suspectedly by desperate agents of the state government.

“Some of the billboards are still hanging, facing downwards and there have been no explanation offered to the professional advertising agent- Rocana who has maintained that it has been paying the Ebonyi State Government it’s taxes, dues and other rates as and when due.

“This to us is an act of cowardice by Governor Umahi and his army of political bandits. To prove our fears and suspicion right about the ill-intentions of these dastard and coward actors, we discovered that other places where the same Rocana had billboards of other products were not touched and neither was the same ‘remove ads’ notices placed on them.”

He described the perpetrators’ act as cowardice, provocative and lawless, stating that further attacks on campaign materials would not be tolerated, while calling on the authorities of the Nigerian Police Force , Ebonyi state command to immediately commence investigations and arrest, prosecute those involved in the act.

He also advised the youths to desist from being used to perpetuate crime, adding “the youths, whose future and destinies, including those of their children and wards have been terribly destroyed by the inhuman actions and policies of the present-day government should remember that when the chips are down, their oppressive ’emperor’ would take the next available flight to the countries they have already stashed enough of our collective wealth and resources and abandon them to their fate to sort themselves out” he stated.