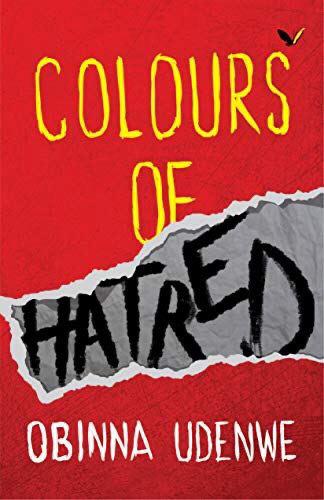 Mr Obinna Udenwe, an author who hails from Abakaliki local government area of Ebonyi  state has been shortlisted alongside 10 others to contest in the 2021 edition of Nigeria Liquefied Natural Gas (NLNG) Prize for Literature award.

The author who has many books to his credit told THE VOICE on Monday in Abakaliki that he was elated for this feat as his latest book, ‘Colours of Hatred’ won him the nomination to contest for the prize.

Others shortlisted for the award include; Obianuju Chukwu Orji for her book, Delusion of Patriots, Mr Samuel Monye, for his book, Give Us Each Day, Anaele Ihuoma, Imminent River and Olukorede Yishau for his book, In The Name of Our Father among others

Udenwe, a prolific writer and the author of the book, ‘Satans and Shaitans’ which won the Association of Nigerian Authors (ANA) Prize for Prose Fiction in 2015 said that the book was written to expose dimensions of hatred and evil effects of war.

The author who gave insight into the 324 page book, said that ‘Colours of Hatred’ shortlisted for the award was published in 2020 and told of the travails of an average Nigerian family as they strove to survive amidst all odds.

According to him, the book tells of a young Nigerian/Sudanese woman, Miss Leona Egbufor who was coerced into marrying a perceived family’s enemy to kill him afterwards.

“Colours of Hatred also draws attention to the Sudanese civil war and how like every other war, it’s devastating effect can cause physical and psychological trauma that may be difficult to heal,” Udenwe said.

Being the first Ebonyi indigene to be shortlisted for the award since it began in 2005, he was optimistic of winning the prize money of $100,000.

“Also, my story, ‘It Has to do with Emilia’ was optioned for film and television by Bridget Pickering of Bump Films,”he added.

Udenwe, co-founder of, ‘The Village Square Journal’ applauded the Nigeria LNG limited for promoting literary creativity through the sponsorship of annual prize for literature award.

He said that the initiative would spur young writers and enhance their literary creative excellence.

The Chairman, Panel of Judges for 2021 prize, Prof. Toyin Jegede, professor of Literature in English at the University of Ibadan with other judges presented the list  on Sunday, July 5.

The judges described the shortlist as fresh approaches to looking at issues, using new and exciting narrative strategies, techniques and well-written organic plots to present topical discussions in realistic ways.

Our correspondent also reports that the Nigeria Prize for Literature, Africa’s biggest reward for creative excellence, would be keenly contested.